This evening thousands in this country will watch their
enemies go up in smoke. The idea came from blowing up effigies of Judas
Iscariot, the apostle who ratted out Jesus. Old Judas, long reviled, has now
become a hero.  It only took two thousand years to figure out
that Judas wasn’t such a bad guy after all. 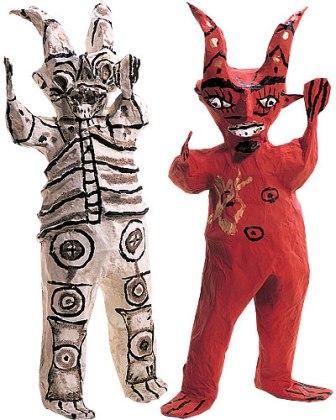 And so it was off to Morelia’s Centro Historico this afternoon to buy a paper-mache Judas, pre-loaded with
explosives. In past years, beyond the usual devilish figures were effigies of
Carlos Salinas de Gortari, Osama bin Laden, or just about anyone anybody sought to
blast into smithereens. I got there too late. All that were left were the
downtrodden devils no one else seemed to want and the Cruz Azul ,
the Mexican futbol team that rivals the Monarcas Morelia. Those
blue-and-white clad devils weren’t worth blowing up.

“You can simply write the name of your enemy on any of
these,” the vendor suggested. At the time, that didn’t seem like a reasonable
solution, but now that I’m back home, I wish I had.

Truth is, what I wanted was a Dick Cheney or a George Bush
to reign over the entrance of my house. I wouldn’t blow those guys up.

2 comments on “Blowing Your Enemies (Up)”