Christian “Stuff White People Like” Lander will tell you that little excites white people more than finding grammatical errors in a major publication. While it’ll never be confused with The New Yorker, this morning’s The News sent a cheap thrill in this white person’s direction:

The Sheraton will darken its marquis and ask guests to close their curtains (although they will not be asked to turn off their own lights).

Mmm. Good. Kraft Dinner. Canned green beans. And are those what we all truly want to be—Oscar Meyer wieners? 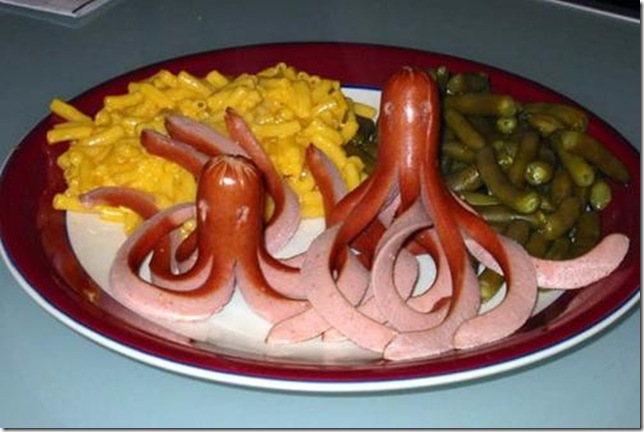 Haute cuisine and fine art. It just doesn’t get much better’n that.

If I started digging a hole in my backyard on the south side of Morelia with hopes of reaching the other side of the planet, where would I end up? Somewhere in the middle of the Indian Ocean, halfway between Madagascar and Australia. Due south of the Maldives.

Check out the Antipodes Map to see where you’d end up.

I deplore broccoli. The sight and smell of ham and eggs send me fleeing from the scene. If chocolate fell off the planet tomorrow, I’d shrug. But I could perform unspeakable acts of depravity for marzipan. And I’d sell my soul for ginger, Coca-Cola Light (a.k.a. Diet Coke in other parts of the world), garlic, and beef, although not necessarily in that order.

I’m sick and tired of the politically correct gang placing the blame for the world’s woes on beef cattle, tobacco, caffeine, guns, and other fun and necessary drugs. These folks could use a few more doses of trans-fats to offset the wimp factor of their tofu and polyester. Did they ever consider that the preservatives in a single Hostess Twinkie also act to preserve and prolong the lives of the humans? Don’t get me started on the matter of “organic.” Garbage and dog feces are organic, too.

You’ll find out soon enough that we are right, and you are wrong.

Guess you heard that 68% of the youth vote went to Obama. My 20 yr old granddaughter called this morning to tell me she was one of them. I replied with this e-mail:

The election of Obama comes down to this. Your grandmother and I, your mother, and other productive, wage-earning tax payers will have their taxes increased and that means less income left over. Less income means we will have to cut back on basic purchases, gifts and handouts. That includes firing the Hispanic lady who cleans our house twice a month. She just lost her job. We can’t afford her anymore.

What is the economic effect of Obama’s election on you personally? Over the years, your grandmother and I have given you thousands of dollars in food, housing, cash, clothing, gifts, etc. By your vote, you have chosen another family over ours for help.

So in the future, if you need assistance with your rent, money for gas, tires for your car, someone to bring you lunch, etc. … call 202-456-1111.
That’s the telephone number for the Office of the President of the United States . I’m sure Mr. Obama will be happy to send a check from his personal or business accounts, as we have, or leave cash in an envelope taped to his front door for you, as we have.

It’s like this. Those who vote for the President of the United States should consider what the impact of an election will be on the nation as a whole and not just be concerned with what they can get for themselves (welfare, stimulus checks, etc.). What Obama voters don’t seem to realize is that the government’s money comes from taxes collected from tax paying families. Raising taxes on productive people means they will have less money to spend on their families.
Congratulations on your choice. For future reference, you might attempt to add up all you’ve received from us, your mom, Mike’s parents and others and compare it to what you expect to get over the next four years from Mr. Obama.
To congratulate Mr. Obama and to make sure you’re on the list for handouts, write to:

Love you Susan, but call the number listed above when you need help.
Take Care!