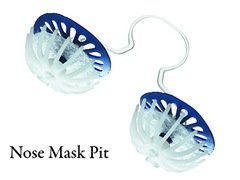 Are you already sick and tired of the blue or white standard-issue mask? Does the mask, coupled with a Bluetooth earbud, make you look more unattractive than you already are? Maybe it’s time for you to try the nose mask on for size.

It might stop the flu, but it probably won’t.

About one in ten, maybe one in twenty, people in Morelia are donning the tapaboca, otherwise known as The Mask. There doesn’t seem to be a distinction between social class and The Mask. I look at the Masked People, wondering if they’re already the sick ones or are going to be the survivors. They seem to be looking at the Unmasked Ones with the disdain reserved for those who regularly have unprotected sex with complete strangers. Silently chortling about how ineffective a mask pulled down past its owner’s chin can be, particularly a disposable mask worn for a week or so at a time, I walk on, still Mask-free, taking my chances. The price of masks has tripled in the past day. If it gets really bad, which it isn’t, I’ll go cowgirl, tying a handkerchief over my mouth and nose. I’m not going to let a piece of paper get between the world and me.

Putting a clean pair of Jockey briefs over one’s head could be just as effective. 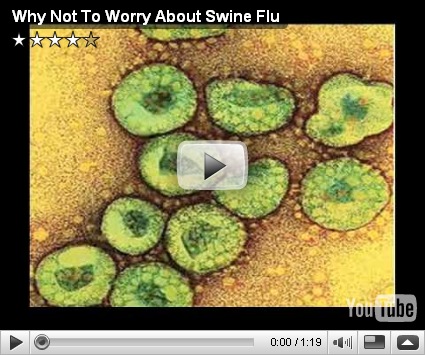 Considering the vast distance between the number of people traveling and those who’ve actually come down with the diseases (remember, there are only a very small number of confirmed cases), it’s actually more likely that a traveler would return home with a social disease than swine flu.

So why does all of America have its knickers in a twist? Correct me if I’m wrong, but did Mexico issue a travel advisory warning its citizens about the dangers lurking in the E.U.A.? 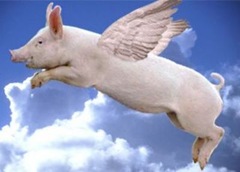 Barack Obama was promised a crisis within the first hundred days of his term. Apparently a crashing economy wasn’t enough. Enter swine flu.

Before Hilary Clinton and Obama visited Mexico, we didn’t have a swine flu problem. We just had to settle for narcoviolence and a lousy economy. Of course, I’m not pointing a finger at anyone, but I’m just saying….connect the dots.

Close the schools. Enact a 10-day ban on public events. Issue an advisory against attending religious ceremonies. Grant special powers authorizing certain people to be isolated, homes to be searched, and travelers inspected. Do these measures sound familiar, harking back to another era?

Meanwhile, life not far from Mexico City goes on.

Twelve Heads in a Bag

Thanks to Richard Grabman of The Mex Files for turning us on to The Krayolas.

David Weinberger seems to think that books may turn out to have been just an accident of paper.

It’s easy to lament the demise of used bookstores, the downfall of public libraries, and the rise of the dastardly Kindle, but think, for a moment, of the number of friends and acquaintances you may have, educated, decent people, respected in their communities even, whose homes harbor nary a book. Frightening, eh? And that goes double in Mexico, where reading books is simply  not an act performed in public. At least among decent folk.

Travis Whitehead, a reporter for The Brownsville Herald, was in Michoacán last weekend for the annual Domingo de Ramos artisanal fair, and he shares his take on the attractive dangers  here.

There’s just something about Easter weekend that makes a heretic think of Jesus. He is, after all, to Easter what latkes and oil are to Chanukah.

What if Jesus had been executed by some means other than crucifixion? You know, like lethal injection, hanging, beheading, drawing and quartering, or electrocution? Would the altars of Christian churches have gurneys, gallows, guillotines, or electric chairs? Would Christian people be wearing hypodermic needles, rope, limbs, a lunette, or a metal yarmulke with a dangling electrode around their necks as jewelry? Instead of crossing themselves, would Catholics start drawing a finger across their throats?

A couple of hundred years from now, or maybe even a millennium, will there be a cult built around Julius and Ethel Rosenberg? Or John Lennon? Or even Homer Simpson?

But as she spoke, and as she became more comfortable, rushes of communication burst forth. Understandable only by the few, she was known for starting a sentence, getting as far as a subject, and then, because she expected that the listener would naturally be able to concatenate and supply the predicate, completing the sentence, or at the very least, thinking the same thoughts, and then she would move on to another sentence consisting of a subject and perhaps a partial predicate, repeating the unique and little-appreciated style of talking that only her closest friends, the kinds who would say “It’s my turn to talk now,” or “I told you that last night but you were sleeping.” There is a kind of friend with whom a perfectly intelligent and comprehensible conversation can take place when both participants are talking at the same time, just as there are the kinds of relationships where volumes of conversation can take place without any party uttering a single word. She would privately consider this strange style a verbal macro: instead of typing in Alt-83 to spew forth a phrase, she considered it well and sufficient simply to say Subject-Predic, not realizing that others might not be using the same code. Recognizing that speech carried with it a certain inefficiency, the minds of both speaker and speakee traveling to other places during those interminable pauses between words, verbal macros took on Esperantic qualities.

And for that reason, she could communicate more effectively in print, where she could see letters form words, words form phrases, and then on to sentences, all of that appearing on a page as a diagrammed sentence.

She often contemplated a world where speech would no longer be necessary. In that world, you would simply think a thought, focus and beam it in the direction of the listener, and the listener would receive the signal, comprehend what was communicated, and respond back in like manner. Sort of like “I’ll read your mind, and you’ll read mine,” except the concept would be extended to a group of people instead of one-on-one. The limiting factor was that those enabled to communicate this way also could read the dirty, filthy, lascivious, lust-filled, deceitful and other thoughts that might best be kept to one’s self. That risk was minimal in comparison to the significant reduction in the use of vocal chords and the wear and tear of lips, tongues and teeth used in speech.

Initially, complete thoughts, sentences and entire paragraphs might be communicated, mind to mind, but after practice, all you would have to do is think A-45, and the listener would know that A-45 meant “Are we having spaghetti again tonight?” Eventually that would evolve beyond the use of alphanumerics and extend to symbols like ¥, β

Imagine, for a moment, if you will, what a difference cessation of the spoken word could mean. The flat and boring noise of the spoken word could be replaced by music, the sounds of nature or internal combustion engines, or even knuckle crunching. Significant amounts of hot air would be reduced, mouth, voices and throats deployed to more useful endeavors like singing, humming, whatever it is that the people of Tuva do to keep themselves on the map when sales of postage stamps lag, yodeling, eating, drinking, tooth-tapping, and tongue curling—uses far more entertaining than garden-variety speech. Instead of having to watch some boring speech by a politician, the speaker would simply beam the message to his audience, impressing them instead, not with eloquent delivery, but with some act far more ambitious and interesting, like tap dancing or juggling.