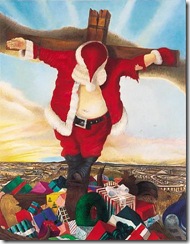 Over at The Immoral Minority, published where surely the North Pole is within sight on a clear day, Santa has been rescued from the thrashing he’s been given by both the politically correct and the religious right. Maybe it is time that we restore him, his goodness and cheer during the world’s day off. There’s a lot more unity in gathering ‘round good ol’ Saint Nick than passing around a baby doll for everyone to kiss.

Like this image? Let’s give credit to Prefiero soñar despierto for that.

Bill Clinton was the Man from Hope, and Obama was The Audacity of Hope. In between those two came Vicente Fox’s Revolution of Hope. Hope never let any politician down. Hope is right up there with kissing babies and handing out party favors.

I’ll never forget arriving at La Soledad, an elegant resort in the old colonial silver city of Morelia, more like a hill town in Tuscany with its ancient vine-covered aqueducts and gracious cathedrals.

Morelia’s old, and it’s colonial, but Taxco and Guanajuato it’s not. If there’s any silver here, it has yet to be discovered. Since when have Morelia’s aqueducts been covered with vines? Is there more than one cathedral in Morelia?

They call it the religion of death, the cult of criminals, narcos and riff-raff. The Catholic Church doesn’t much like it, and neither does the government. All of this sounds suspiciously like a cult that started some two thousand years ago, doesn’t it? That’s Santa Muerte for you.

So, it was the day before Day of the Dead, and we’ve seen everything new there was to see in Patzcuaro. It was time to do some exploring, and we went off to the tiny burg of Santa Ana Chapitiro, nestled along the winding road between Patzcuaro and Erongaricuaro. On the lake side of the road sits a small chapel dedicated to Santa Muerte, and we went in, not knowing what to expect. 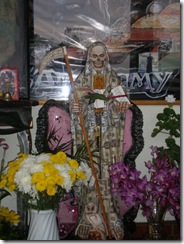 We were taken aback by what we saw. And fascinated. The chapel was filled with a refreshing sense of faith, mixed in with caring, devotion, and humor – more so than what we’d seen in ages and ages. A catrina sat waiting for the perfect man, and it’d been evident that she’d been waiting a damn long time. The people in charge weren’t the kind of folks who’re “not our kind.” For all I knew, they could’ve been actuaries, orthodontists and schoolteachers. They were amazingly normal. They were nice and gracious people, the kind of people you’d pick for neighbors.

So, why is everyone up in arms over Santa Muerte? Beats me. Maybe it’s the frank honesty that institutions really fear.

Many thanks go to Marisol Contreras of Morelia for supplying these photos when our camera didn’t work.