Giclee on canvas reproductions of Ocampo’s work, which we refer to simply as “Ocampos,” just as we’d call anything by Picasso “Picassos,” began to show up at the carnivals that accompanied the fiestas patronales honoring the patron saint of practically every typical Mexican burg. On the 15th day of August the La fiesta de la Asunción, Assumption Day for the rest of you, rolls around in my neighborhood, which means that the plaza and surrounding streets are filled with carnival rides that have been declared unsafe in places like Oklahoma, carnival games of chance promising valuable prizes, corn dogs, pink party cake, and a mole fest.

But if all that’s not enough to separate fiesta-goers from their money, there’s plenty of stuff to buy: pirated DVDs, bras, houseplants, and hand-made appliqued frilly toilet lid covers. And art. The giclee-on-canvas Ocampos may have been around for ages for all I know, but I didn’t first really pay much attention to them until 2004, when a long-term houseguest we’ll just call Kato bought a couple or three of them to decorate the casita, promising he’d leave them behind. He would leave, taking those Ocampos with him, and they now reside in Santa Fe.

Ocampos were suddenly all over the place: in front of the Basilica in Patzcuaro, on the side streets leading to the Basilica, and at the muelle. His work had to be the most-pirated work around, showing up in greater numbers than the Boteros of a few years earlier.

We’re sure that we read in some interview with the artist somewhere, sometime, where he was asked how he felt about seeing all of those unauthorized reproductions of his work where common folk could easily purchase them. His response seemed to be, if we remember correctly, was something about the futility of copyright, his compensation for the originals, and accessibility of his work to the kind of people who buy their art at carnivals. And so, we would go on to relate to others what we thought we’d read, only to hear those others remark about what a swell, practical kind of guy he must be. But then this may be myth for all we know, or maybe it was something we just dreamed up because it sounded good.

Ocampo may be Mexico’s most prolific artist you’ve never heard of. He’s one of those artists whose works everyone recognizes, but whom no one can connect a name.

Edgar Hoill, writing for Lowrider Arte Magazine, sat down with Ocampo, and he shares their exchange in “Octavio Ocampo – The Art of Metamorphosis.”

And we’ll share more of our search for Ocampo in coming installments.

We don’t know how this story is going to end, but it begins during the middle of the sexenio of Carlos Salinas de Gortari at Morelia’s Fiesta Camelinas, a shopping center at the corner of Camelinas and Venture Puente. An art supply and frame store had a few pictures displayed at its entrance, and one caught my eye. Well, truth be told, it caught my mother’s eye more than mine, and even though she had impeccable taste, she did tend toward artwork that coordinated with the furniture. She thought the piece would work well with the claret leather sofa in the gray-walled living room. I would return to the art supply and frame store later that day and buy the print. After all, it was already framed and matted, and you can’t go wrong with that.

And to this day it hangs in the living room, now painted dark green, sometimes switching places with a Jesus Escalera piece and my mother’s glamour portrait for display in the dining room, now covered with pale salmon walls, bookcases and a map of the world. Sometimes I hang it alongside the dour portraits of my great-grandparents, the only images of any relatives I’ve got anywhere in my house except for the few photos I drag out for the Dia de los Muertos ofrenda.

Ernesto Zedillo would occupy Los Pinos, and my mother’s passports would join my grandparents’ documents on the ofrenda. I would make Mexico my permanent home.

Not until the early years of Vicente Fox’s administration would I pay much attention to what was penciled in: 6/500 on the lower left-hand side and in the usual right-hand place the artist’s signature, O Ocampo. There wasn’t a lot about him on the web back then, his first Wikipedia entry in Spanish as well as English not showing up until Felipe Calderón’s presidency was well underway in 2007. All I really knew for sure was that there were 499 other prints just like mine circulating around the planet.

And then I began to wonder if everyone else already knew about Octavio Ocampo. Was his name a household word that somehow I’d missed along the way? Who is this guy?

Stayed tuned as some of the story unfolds, even if we don’t know how it’ll end. Or even when it’ll end.

There’s still nothing quite like AutoZone, unless, of course, it’s Galerias el Triunfo to get in touch with your inner redneck. Red Shoes just loves it when urbane and sophisticated kinds get their redneck on at AutoZone, just like Don Cuevas at My Mexican Kitchen did.

Red Shoes are Better than Bacon 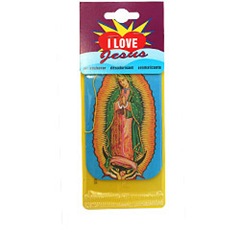 So, I’m at AutoZone the other day, one of Morelia’s three branches, an entirely new experience for me, and I’m enthralled by the choices: strobe and neon lights for under the dash and around the license plates, sparkling lights for the hubcaps, vinyl flames, and a vast array of amazing decals. But it was just too difficult choosing between the weeping Jesus and the Virgen de Guadalupe. And, since they were plumb out of locking gas caps, I left empty-handed. But when the new car smell fades, I may be back there in search of a Virgen of Guadalupe rose-scented air freshener to hang from the rear-view mirror. Sure, it’s naco, but those things are just hard to resist.

Oh, sure, we can dress ourselves up like we’re straight out of Las Niñas Bien orCompro, Luego Existo and make ourselves appear as if we stepped straight from Guadalupe…