Red Shoes are Better than Bacon occasionally engages in productive activity, and we’re proud to share with you our latest achievement.  You don’t have to be a lawyer to love Effectively Staffing Your Law Firm, 2nd Edition.

Let’s look at the details:

Good law office staff is harder to find (and keep) than clients (and sometimes spouses). Not a mere receptionist, typist, and filing clerk, good support staff can be the lawyer’s alter ego, right arm, custodian, den mother, rabbi, and guardian angel. Could you manage if your staff didn’t show up tomorrow morning?

The average solo or small firm lawyer may spend more waking hours each day with staff than with a spouse or significant other. And in some cases, even years longer. They will devote all kinds of time and money searching for that significant other, courting the person, learning how to live with that person, being trained by that person—but when it comes to staff, an “Oh, that one will do” more frequently than not seems to be the way it is all approached.

We Mexicans don’t often agree on a lot of things. We’re like Jews that way. Put six Mexicans or six Jews together, and you’ll have eleven opinions. Nothing — tacos, nopal, the tri-color of PRI, not even the eagle and the serpent — will put all Mexicans on the same page. But there is one dame whom every Mexican venerates, right down to the atheists and the evangelicals and the Mormons and even the testigos de Jehová, and she’s the Virgen of Guadalupe. No one brings us all together like she does.

The holiest day of the year, bigger than Christmas and Easter, is Dia de Guadalupe, the 12th of December.

You’re heard the saying that only 82% of all Mexicans are Catholic, but 120% of us are Guadalupanos. Being Mexican (or even living in Mexico) and not appreciating the Virgen would be sort of like being Episcopalian and eating shrimp cocktail with the salad fork. It’s one of those things that’s just not done. The Virgen’s not just a saint – she’s the mother of our country, the icon of Mexicanidad, and she knows no borders. There is no woman in all of the Americas more powerful and more venerated than she.

So, if you’re going to be a real Mexican, her visage will adorn more than few rooms in your abode. I’ve got her image on a shopping bag, and an enameled version of her accompanies my car keys at all times. Several more Virgens show up here and there, done up in glitter and ribbon, most likely purchased during Mes Patria. It was only natural that I’d pick up a giclee on canvas reproduction of Octavio Ocampo’s Virgen de Guadalupe about a decade ago.

And then we just couldn’t take our eyes off of Ocampo’s Virgen. There was a magic in this one, new details revealing themselves each time I looked at it: faces inside of roses, campesinos on her eyelids, angels on her robe, a man caressing her left cheek, the new Basílica de Nuestra Señora de Guadalupe and the old one on the left, a red brick gothic church that looked like it would be right at home in Germany on the right. And wait, it’s not just a painting, but a metapainting on a canvas being held up by an almond-eyed Juan Diego. 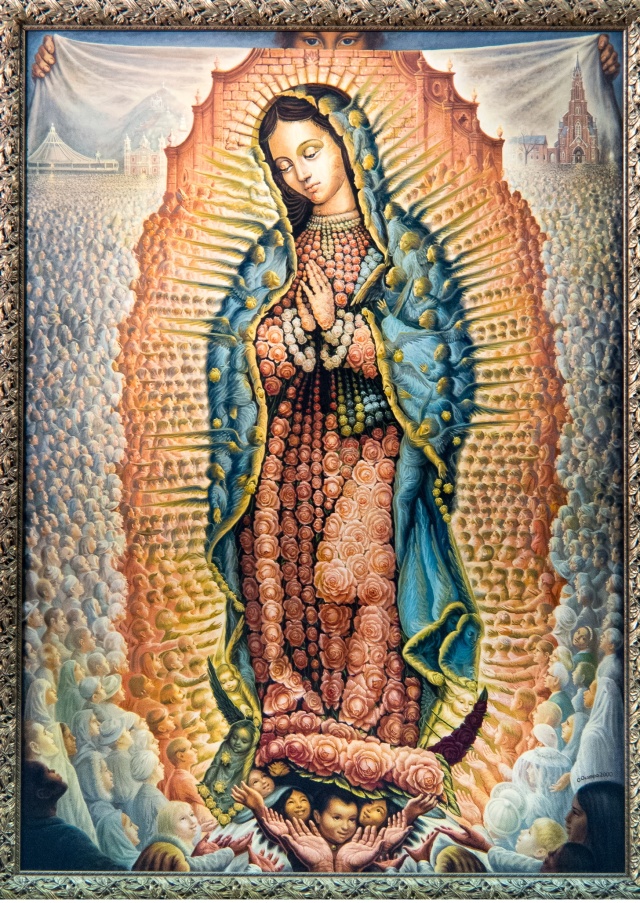 Our research about the background of this work went off and on, since we’ll never be confused with serious researchers, much less art historians. Ocampo created this work, measuring some 1.70 meters in height, on commission in 2000 for St. Nicholas Roman Catholic Church in Evanston for $60,000 USD. And it wasn’t just happenstance that brought Ocampo’s work to this church. The Saint Nicholas Parish had been a polyglot church longer than it hadn’t, its parishioners going from mostly speaking German to speaking mostly English to speaking enough Spanish that its website is now bilingual. Its Mexican parishioners were mostly drawn from Celaya and Salvatierra in the state of Guanajuato, Ocampo was born in Celaya, and everyone from the Bajio has a cousin in Chicago.

But we still couldn’t envision how this painting looked in living color, so we searched the church’s website until we came upon Dale R. Granchalek, who graciously went out of his way to provide the photos shown in this blog post, recruiting his colleague, Deb Winarski, to photograph the single image of the painting.

My little 12 x 18” pirated version of Ocampo’s Virgen seems paltry in comparison to the real thing, but it led me to the real thing and the story behind it, so that makes it important and valuable to me.

Meanwhile, my small, cheap reproduction now resides in a country house on the road to Guanajuato, Grace Slick having begged me to loan it to her, since her house lacked a proper rendition of the Virgen. So, I extracted a blood oath from her, a covenant to protect the Virgen, returning her unharmed to my house after she performs the necessary and appropriate miracles in her new location.